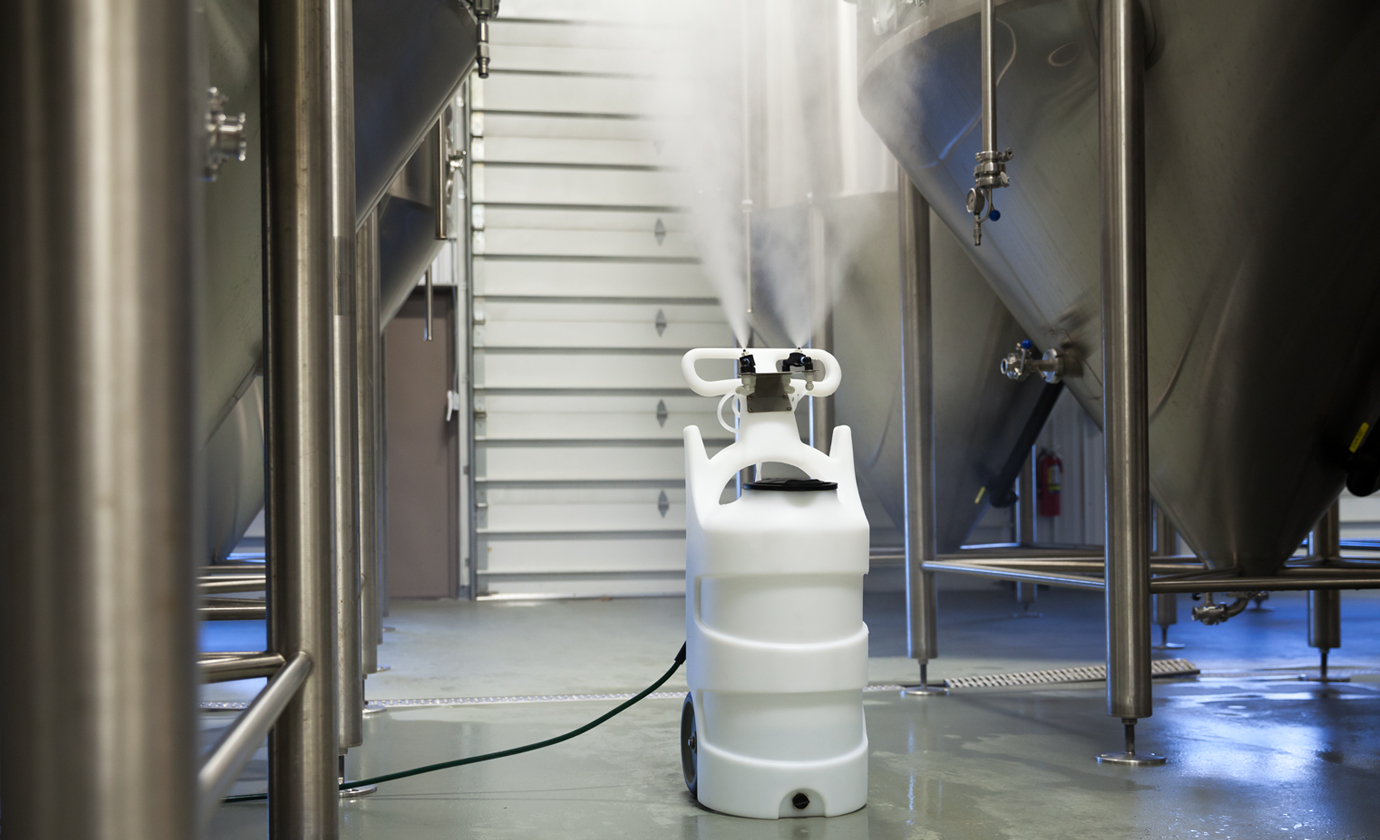 Part I: Definition, Objective and History of Fogging Biocides

The technology of fogging either as an insecticide or biocide has been utilized for a variety of pest control or environmental hygiene remediation for numerous decades in the 20th, and now 21st century.  While insecticide fogging has had a long successful track record, we are of course, focusing on biocide fogging disinfection. Both utilize similar delivery equipment.  Under successful programs, both have proper safety and operating procedures in their SOPs and programs.

How does one define fogging?  Fogging means to apply any pesticide chemical agent (insecticide or antimicrobial biocide), in a micro-aerosolized liquid mist where roughly 80% of the particle size is below 20 mM (microns) in diameter.  So, spraying of a biocide is NOT fogging.

Consequently, a fogged pesticide has a very fine mist that will travel and migrate into minute niches to destroy insect or microbial pests. Because the tiny sprayed diameter of the biocide's particles is to penetrate tiny niches, the objective is not to disinfect the air, but to reach the inaccessible source niches of the problematic airborne microbial spoilage and pathogenic strains (bacterial or fungal or viral).

The Primary Objective of Fogging

To reduce the microbial niche sources on both environmental (Zones 3 & 4), and in some instances, on food contact surfaces (Zones 1 & 2). The objective of a fogging program is to reduce inaccessible sources of microbial contaminants that slough off and become airborne, that can result in the cross- or re-contamination of food contact surfaces: especially CCPs, and actual in process food/beverage products.

Fogging disinfection began in the 1950s to reduce communicable nosocomial infections in hospitals including TB.  SC Johnson’s McGray, back in 1964, conducted a review of fogging studies and methods performed in clinical settings.[1]

Also, back in 1962, Hauser, et al, developed a variation of the AOAC test method using a ULV Fogmaster testing mostly QAC biocides. [2] This AOAC method was a test method for “pressurized germicides”. Both Hauser and then McGray found, by rotating the Fogmaster on a turntable creating a rotational delivery with an up and down arc, improved microbiocidal efficacy with microbial reductions way greater than the initial (without rotation) at 90% (1 Log10) up to 99.99% (4 Log10).

Heldman, back in 1974, reviewed the factors that contributed to the airborne cross- contamination of food and beverage products. Heldman discussed how airborne microbes can settle onto products causing food quality and food safety issues. The surface or liquid source niches where the microbes (bacteria, or fungi, or viruses) were settled in soil matrices could easily become dislodged, then airborne due to air agitation and ventilation dynamics. Heldman concluded that the hygienic control of the source niches for airborne microbes such as air vents, beams, HVAC systems, and even drains, will control airborne microbial contamination via sedimentation. [3]

In the late 20th century, studies were done examining the impact of microbial airborne contamination in dairy plants and meat processing plants. Both studies advocated fogging to control sources of airborne contaminants. Kang and Frank conducted a thorough study of aerosols in dairies. Like Heldman, it was found that the air system and ventilation hygienic design flaws created issues.  Also, they found the same niches that caused the sources of airborne contamination (vents, beams, HVACs, etc). They further concurred that fogging disinfection was an excellent approach to treat inaccessible niche sources. [4]

Kotula and Frank did comparable studies in meat (pork) processing plants for the USDA in studies published in 1988. They observed that in addition to inaccessible environmental niches, processing modes like high speed blending or mixing of raw pork products created micro-aerosols full of coliforms, Listeria and Salmonella species.

In improperly segregated USDA plants, these raw micro-aerosols could contaminate cooked, in-process or final products. Due to the aggressive agitation of raw blends, the airborne microbial loads were a factor of 10 times higher than dairy plants. They advocated utilization of a consistent fogging disinfection program as part of an USDA processor’s overall sanitation program.[5]

Onto large panels of the two surface types in a set, demarcated replicates of 3 per panel, a mixed set volume cocktail with a 5% serum soil load of Staphylococcus aureus and Enterobacter aerogenes, were sprayed onto panels under a biohood, dried, then brought into a fogging chamber for treatment in a horizontal orientation. One of the squares was sampled as a positive control. The fogger ran a biocide for a set period of time (20 minutes) from a set distance permitting the biocide to settle for 1 hour, then sponged swabbed 2 demarcated sample zones. The sponge swabs were placed into a Stomacher bag with neutralizing broth, with set aliquots membrane-filtered for survivors on appropriate media.

It was found that stainless steel had better results in terms of biocidal log reductions than neoprene.  A variety of biocides were tested and included PAA, Hypochlorite, Chloramine, and QAC. Results favored the oxidizing, slow-releasing Chloramine on both surfaces.[6] This proved to be a useful, large-scale model that was very labor and materials intensive.